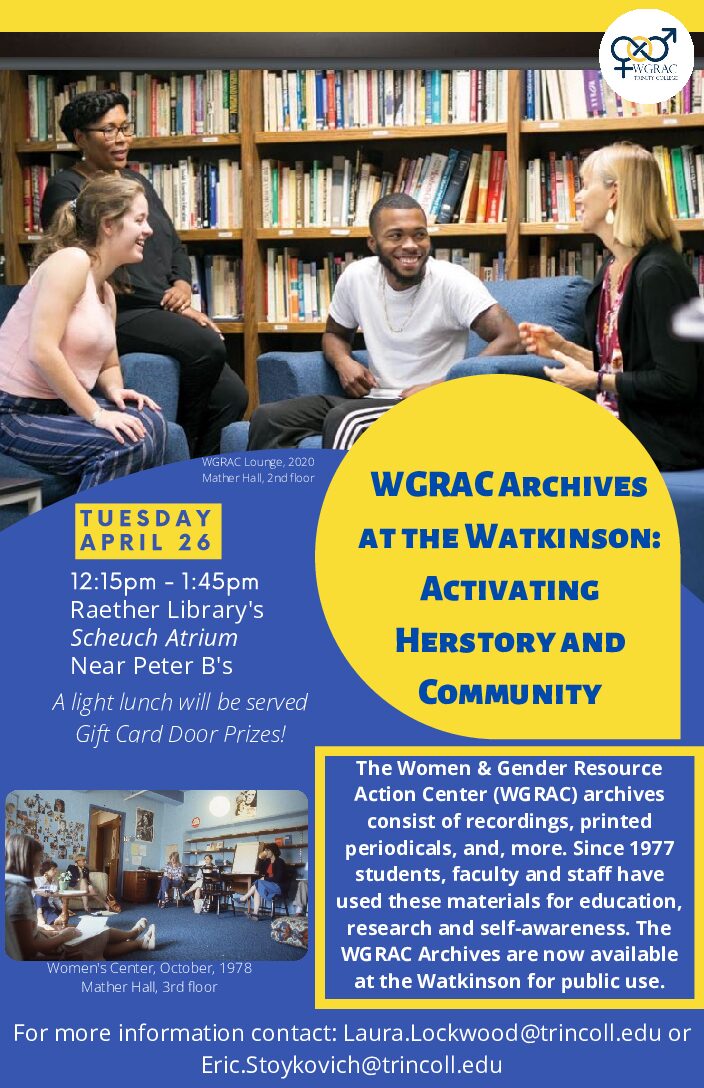 In early 2020, the Women & Gender Resource Action Center (WGRAC) Director, Laura Lockwood, reached out to the Watkinson Library to inquire if the College Archives would be interested in taking in a portion of the articles, papers, and audio in the WGRAC Library and Lounge. Accumulated over its 45 years of history, the print and audio records chosen for inclusion represent a great new addition to the Trinity College Archives. Working in partnership with WGRAC, the College Archives within the Watkinson Library now makes these resources related to the empowerment of women available for public research and educational use.

Founded in 1977, Trinity’s Women’s Center (now known as WGRAC) has a long herstory, but now it begins a new chapter with a presence within the College Archives.

By point of comparison, the records of the women’s centers at Yale University and the University of Connecticut, founded in 1970 and 1972 respectively, were transferred to their institutional archives beginning in the decade after 2005. Thus, Trinity College is not lagging so far behind other peers in its move of some of the historical records across campus from the WGRAC offices on the third floor of Mather Hall to the Watkinson in the Raether Library. It was the foresight of current director Lockwood, who saw the potential for extended use and archival preservation of the feminist texts and faculty recordings stored on older media like paper and audio-cassette.

The new collection “Women and Gender Resource Action Center (WGRAC) Records” is currently comprised of three main types of materials – subject files dating from 1968 to 2011; lectures and talks from 1987 to 1996; and print publications from 1972 to 2006. A much smaller set of administrative files relate mainly to the President’s Special Council on Women (PSCW) between 1980 and 2008.

The Subject Files are a vertical file potpourri of photocopies, clippings, and original work created by and for Trinity students and WGRAC staff, who sought to read about a variety of academic and life-oriented subjects that might not ordinarily be covered within the Trinity curriculum. This search for good sources was more difficult before the reach of the internet. For instance, anorexia and eating disorders, sexuality, sexual assault, reproductive rights, domestic partner abuse, gender equality, and pregnancy were major topics of interest. Other files on topics of enduring importance, such as those for sexual harassment, Title IX, and educational equity, help us understand the sociocultural debates of the 1970s and 1980s. Numbering over 45 audiotapes, the recordings of lectures and lunchtime WGRAC talks span a decade in which frequent Trinity faculty presenters included Barbara Benedict, Adrienne Fulco, and Kathleen Kete. The Print Publications, which the Women’s Center made available to drop-in users of its library, included well-known feminist magazines (e.g. Ms. and Essence), more specialized feminist journals (e.g. HERESIES: A Feminist Publication on Art and Politics and Lesbian Connection), along with scholarly periodicals such as AACU’s On Campus with Women.

By the end of 2020, over 100 print serial titles had been collected and were accessible to readers in the WGRAC library. These included two WGRAC-produced publications: the Trinity College Women’s Center Newsletter (later called Women Unite!) and the Feminist Scholarship Review.

Now some of these journals will have a new purpose within the WGRAC collection at the Watkinson, while the majority of the titles will be catalogued and available in the Main Library’s periodical range.

Lastly, the ‘WGRAC Records’ contain a small set of materials detailing the work of the President’s Special Council on Women (PSCW) at Trinity. In 1976, President Theodore Lockwood established this “advisory group appointed by the President and composed of students, faculty, administrators, and graduates of the College” to address “both academic and non-academic aspects of life at Trinity as they affect women.”[1] Accomplishments of the PSCW include sexual harassment training for faculty and staff, hiring of an affirmative action officer, and creation of guidelines for hiring, recruitment, and training of supervisors and faculty.[2]

Once the WGRAC collection arrived at the Watkinson Library in early 2020—some of which WGRAC student assistants toted down the hill from Mather during the first months of the pandemic—it sat in the Watkinson’s climate control shelves until the hiring of a processing archivist in late 2021. An experienced professional archivist, Amy FitzGerald, was assigned, as the first project in her role, to arrange and describe the WGRAC Records for inclusion within the Trinity College Archives. Using a fairly detailed Processing Plan, Amy re-foldered the files with acid-free folders, separated newsprint with acid-free paper, re-arranged items which had become disordered over the course of their creation, flagged materials of a restricted or sensitive nature, removed rusty paper clips, and performed many other important tasks. After Amy had arranged physically the folders and inventoried the audiotapes, she worked to enter the metadata into the finding aid. Using ArchivesSpace, the open-access online tool that houses and presents descriptive data about the Watkinson’s manuscript and archival collections, Amy in the end produced a comprehensive, and word-searchable, means of accessing the collection. The finding aid provides a fine short history of WGRAC and a list of its former staff members.

While Amy was hard at work on the loose papers and cassettes, Watkinson Library student assistant Sydney Yu ’25 was tasked with sorting through the print publications and making a list of titles and date ranges of the issues.

In turn, this list was given to Special Collections and Rare Books Librarian, Eric Johnson-DeBaufre, who made appraisal decisions about which magazine and journal titles to retain and which duplicated holdings already found in the Watkinson or Trinity’s Raether Library. These decisions reflected an understanding not just about former and current use of printed serials, but also a consideration of rarity and research value in the areas of feminism, sexuality studies, and gender equity.

It should not be a surprise, but many publication titles related to women’s issues will be added to the Library’s holdings for the first time with the move of these resources from WGRAC to the Library. Print versions of some periodicals, such as Lesbian Connection, The Waterfall Connecticut News, and Working Women, were not purchased by the Library during the heyday of their print runs. Instead, the library of the Women’s Center had been one of the sole providers of these texts on Trinity’s campus. Thus, the arrival of the WGRAC archives to the Library highlights the ways in which collecting practices within the Trinity College Library during the 1980s and 1990s may have been inadequate to the task of teaching an increasing coeducational student body, and that the Women’s Center has continued to fulfill a necessary function on campus throughout its decades.

At the same time, the migration of the WGRAC library and archives to the Watkinson Library is a moment to celebrate a new epoch of WGRAC serving the students of Trinity. Many of the fiction and nonfiction books, DVDs, and active archival files, will remain at the WGRAC Lounge and Library for use between 9am to 5pm with the supervision of WGRAC Director Laura Lockwood.

The ‘WGRAC Records’ at the Watkinson Library are available for public use and enjoyment during scheduled research appointments between the hours of 10-12am and 1-4pm on Tuesdays through Thursdays. Please contact College Archivist Eric Stoykovich (eric.stoykovich@trincoll.edu) for more information and to make an appointment to access collections in the Trinity College Archives.